First I want wish you all a Merry Christmas. May God Bless you and yours with a wonderful Holiday Season and a prosperous 2016! Thanks to all who continue to support Ron Speed Jr’s Adventures. We are very grateful for your loyalty and friendship! 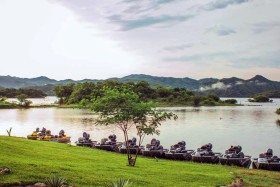 This lake continues to amaze! In one of my recent updates prior to the fishing season beginning, I mentioned that I expect the size of the bass to improve with another year’s growth…and with the early reports coming in, that definitely appears to be the case. A couple of weeks ago, I received a call from J. W. Peterson who was at Picachos with a big group. J.W. called from his cell phone from the lodge (yes, we have cellular service at our lodge) during lunch to let me know how great the fishing was but particularly the size of the bass! That particular morning, J. W. and his fishing partner had landed 210 bass…THAT MORNING! J.W. informed me that only about a dozen of those bass weighed less than 2 pounds…and the majority were extremely fat 3 and 4 pounders! They also had bass in the 6, 7 and 8 pound category! 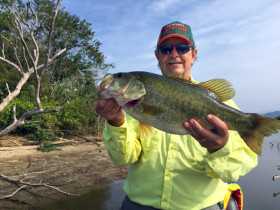 Roger Sessions with one of his Picachos 9lb bass caught in Dec.

Then last week I received a call from Roger Sessions who had just returned from Picachos. Roger had just completed his 4th trip to Picachos in the past two years and rated this recent trip “THE BEST ONE YET!”…Roger landed two bass in excess of 9 pounds! He and his partner also averaged over 175 bass per day…and get this, “Ron, we had two days of solid cloud cover and caught most of those bass on TOPWATER”…yes, folks…TOPWATER!

We’ve hosted 4 big groups this month (Dec) at Picachos and almost every boat has landed a minimum of 100 bass per day and the majority have averaged 150 – 200 bass per boat, per day. Some boats have exceeded 300 bass in a day! Bass fishing really doesn’t get any better than this, folks! 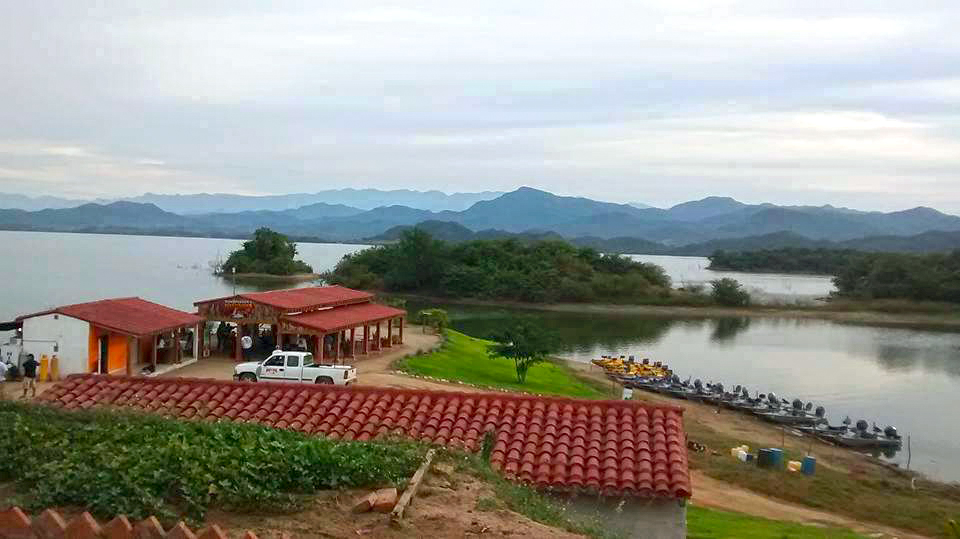 View of Lake Picachos, Mexico from our lodge houses. See our restaurant and bass boats below. Breathtaking view and beautiful lake. Oh yeah, it’s FULL of bass too!

While we haven’t hosted very many groups at El Salto this month, the ones that have fished returned EXTREMELY happy! The numbers are way up this season from previous years. Most of our fishermen in December have been averaging 60 or more bass per day/per boat, with many landing 75 – 100 per day. Some have landed well over 100 bass per boat! There have been a few bigger bass in the 9 and 10 pound range landed thus far. However, the bigger fish have been a little deeper than normal due to the hurricane that came across El Salto and Comedero (more on Comedero below) at the end of November…which dumped a lot of hot water in the lake and on the water’s surface. This caused the bigger bass to head back to deep water until the nights begin to get cold like they normally do in mid to late December. That’s when the water temperature in the shallows will cool down and bring those big bass back shallow. That should be happening right now…but our next group will not be at El Salto until the first week of January. I’ll have an update in early January.

Well, there’s really not much to report thus far as we’ve only had a couple of small groups fish the lake. However, prior to the first small group arriving on November 30th, I sent Terry Oldham and Steve “Big O” Parks down three days early to locate the big bass. Their first two days (Nov 28th/29th) was unbelievable! Terry called and said it was pouring down rain. I told him, “that’s because you have a hurricane (tropical storm by the time it arrived at Comedero) going right over the top of you right now! It didn’t stop Terry and Big O from fishing. Terry informed me that it was going to be easy for that first group to catch the bigguns because he had already landed several 10 pound bass in the first two days and Big O, who was fishing in a separate boat alone, had also landed a few 10 pounders PLUS one toad that weighed 12 pounds!!!

He caught it on one of his awesome Rage Tail Thumper Worms! Anyway, the start of their third day of fishing, November 30th…Terry said the water had a green/brown stained color to it…plus a sour smell…and the water temperature had risen from 78 degrees to 86 degrees…in 24 hours!!! Well, that was the effect of the hurricane dumping a lot of hot water into the lake. Lake Comedero, being higher in the mountain, receives much more runoff from rainfall. We know this from fishing the lake for 28 years! This hot water on the surface caused the fishing to slow down and the bigger bass to head to deeper water. The only thing that will cool that water down in the shallows is cool to cold nights. Well, December and January are our coldest months of the year. Carlos, my general manager in Mexico, called me yesterday after he had spoken to one of our guides (Gustavo)…and Gus told him the nights had cooled down, as had the water temperature, and the fishing was back to being superb again. Gus is a pretty good angler and is helping us keep tabs on the fishing at Comedero. We do not have any groups there right now but will have soon! I will update you as soon as we have reports from “customers” fishing and their catches. I can’t wait to get down there myself. Last year when I took a group of customers to check the lake in early January, we absolutely wrecked those big bass! Most were spawned out and yet we still had more than a half dozen over 10 pound to include Oldham’s 13 pound hawg! Oh yeah…she was 90% spawned out or she would have been pushing 15 pounds! Again, I will update you in early January but I expect the trophy fishing to be very good for the next three months! This is the reason to fish Comedero…for GIANT bass! They’re still in there…Oldham and Big O proved that less than 30 days ago!

GET THOSE KIDS HOOKED ON FISHING!!!

When I was a kid growing up, I was blessed to have a father that introduced me to fishing at an early age. My father started out coaching high school football in the 60’s…but he also guided on local lakes on the weekends and during the summer months when he wasn’t teaching/coaching. He always applied for open coaching jobs at schools that had a great bass lake nearby and especially if there was a new bass lake opening on the horizon. In 1970, he applied for the open head coaching position at Hemphill H.S. …because Toledo Bend Reservoir had just opened. My dad began guiding out of Six Mile Marina and I was able to experience the best bass fishing of my life…well, up until then. Four years later, he was already in the bass fishing business in Mexico and building the first two lodges on the soon-to-be-famous Lake Guerrero Mexico. My father took my brother and me down to fish it for a week. After my first 30 minutes of fishing Guerrero, I thought I had died and gone to Heaven! My brother and I were catching 4 and 5 pound bass on black Lucky 13 topwater lures on nearly every cast! As if I wasn’t already hooked on fishing, that trip will forever be my most memorable week on any lake. Yes, I’ve had days where I’ve caught more and bigger bass on other lakes but at 10 years old and never having caught more than 25 bass total in a day, that trip officially got me hooked. I think back on how blessed I’ve been that I had a father that cared enough and loved his boys enough to share such an experience. That it wasn’t just about business or making money…nope. He always made the time for his two boys…and now my younger sister who came along 21 years after me. He got her hooked on fishing as well…and she has something on her fishing catch resume that I don’t…a 52 pound catfish on rod & reel! She was just 15 years old when she caught it, too. We Speed children are truly blessed. Thanks, Dad!!!

For those Moms/Dads out there…this is the best time to treat your kids to a fishing experience of a lifetime! We always reduce our costs for kids 18 years of age and under…regardless of the time of year. However, we offer much lower costs during March (Spring Break) for all father/mother/son/daughter combos! This applies to all three of our lake/lodge operations. Now, with the Christmas Holidays upon us, I am going to offer the same Spring Break special rate to those who can get down there now before the kids head back to school in early January! We will be running this from now until January 15th…then again the entire month of March. Also…and pay attention…we’re changing the age from 18 and under to 21 and under for the kids’ discount. I’m sure there are some college kids that could use a few memorable days on the water catching bass to their hearts’ content.