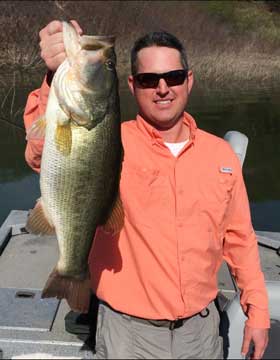 I won’t say a lot here but just let you read testimonies from some recent anglers. I will say that we recently entertained ledgendary pro angler Denny Brauer as well as Don Rucks who is chairman of Major League Fishing show (TV and Internet).

Here is what Denny had to say…

That was one of the best flipping days (on Comedero) I ever had! Ron Speed Jr’s Adventures should be on every angler’s bucket list. All of his Mexican lakes offer the trip of a lifetime. I try to go at least once every year. We have never had a bad trip!

Here is what Don Rucks of M.L.F. had to say…

If I could only go to one Mexico lake year after year, I would make it Lake Comedero, hands down. If you are looking for a real Mexico fishing adventure, then Lake Comedero is the place to go, in my opinion.

Once you arrive at the lake, you realize you are at a beautiful, remote destination surrounded by a warm, true Mexican community. The lake’s setting is in the Sierra Madre Mountains and it is absolutely beautiful.

I have hooked more big bass on this lake than any of the others I’ve been able to fish. I don’t know exactly how to explain it, but every time I return back home from a trip to Lake Comedero, I feel like I have been on more than just a fishing trip; I’ve been on a real adventure.
– Don Rucks/Major League Fishing

**For more on Don Rucks’ and the Major League Fishing group’s experience to Comedero and Mexico fishing with RSJA, please visit their site by clicking link below…
http://majorleaguefishing.com/news_details.aspx?id=18649

Fishing with Denny Brauer was our longtime friend and owner of Southwest Parts in Dallas, Shane Moore. Here is what Shane had to say…

Just wanted to send you a quick email and tell you about our Comedero trip. As you know I had the pleasure of fishing 4 days with one of the all time greats of the sport, Denny Brauer. I was excited to get back down there as that has always been my favorite of all the lakes in Mexico. First of all let me start by saying the food was awesome. We had some great meals and the staff was very friendly. The addition of the new Express boats was a pleasant surprise as well. That combined with the new 24 volt Minn Kota trolling motors and color graphs on each boat made for all you could ask for that far south of the border. Now to the fishing…..We had a really good crew of very good fisherman. The first morning started out pretty slow. In all the years I had been down there I have never fished the lake that high (water). Right before we came in for lunch ol DB picked up the flipping rod and jacked a 6 #er out of a deep tree on a Strike King Rage Bug. I couldn’t wait to get back out after lunch to try to replicate that flipping bite. As we started that first afternoon, we pulled up on the right stuff and started pounding on them. We stopped counting the 6 pounders and the numbers were staggering. As Denny and I can attest, those fish in that lake are as big, healthy and mean as any fish you will catch anywhere. On the 3rd day, we really got dialed in and had our best day…. even though we started running out of Rage Bugs and Rodents. We boated over 100 bass flipping and had numerous over 7 pounders, 7 over 8 pounds and a 2 over 9 pounds. I did jump off 2 fish that I know were over 10 and there is no telling how many fish we lost in that thick stuff. When I heard this comment from Denny right before we came in it made me realize how special our day was “That was one of the best flipping days I have EVER had” (Denny Brauer). That’s a pretty stout statement coming from a flipping legend. Thanks for all you guys do. Cant wait to get back down there next season!
– Shane Moore 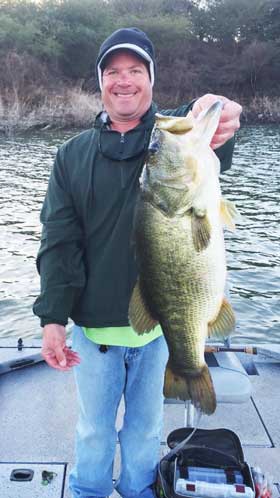 There you have it, folks! These coming from some of the best and most respected anglers in the industry! These groups fished at Comedero in January while the water level was extremely HIGH. I honestly believe the best fishing this season is in front of us and the high water has pushed the big spawns to happen in February and March. There were not many spawning bass caught in January when Denny Brauer, Shane Moore and Don Rucks’ groups were there. So if you want to have a great opportunity to hook in to a giant bass of a lifetime, you really need to get to Comedero this season. We will only stay open until the end of March. CALL US NOW TO BOOK YOUR TROPHY BASS TRIP OF A LIFETIME!!!

Once again, I will not say a lot but provide you with some astonishing catch numbers and testimonies from our recent customer groups…. 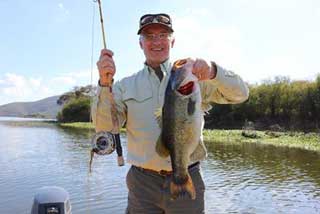 I was just at your lodge on El Salto the week of January 25th to the 29th. I want to thank you for actually delivering what you advertise. The entire staff was friendly and helpful, the food was fantastic, the accommodations were nice and the fishing incredible! I figured since I only fly fish, I’d probably end up putting a wrench in the works but the guides were able to adapt to my style of fishing quickly and both the guides and I had a great time. 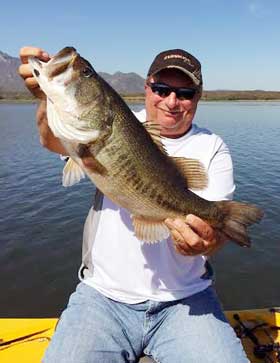 Here are some recent daily catches by our customers… 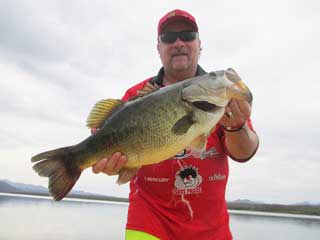 Ric Younkin with one of his El Salto Topwater beauties!!

LAKE PICACHOS…IS IT REALLY EVER NOT HOT???

There’s really not much more we can say about this amazing lake. Most of our customers are still experiencing catches of 100 – 200 bass per day per boat. The average size still appears to be up from the previous season. Like Comedero, it appears there weren’t many bass spawning in January due to the lake level being higher than most years in January…of course due to the El Nino rains in November and December. Therefore we anticipate big spawns in February and March. Last February the current lake record of 12 lbs 14 oz was landed by Scott Moody…and that fish was 90% spawned out!

As I’ve stated many times in past updates, if you want the best chance to catch bigger fish from this lake, then you should strongly consider fishing Picachos in March, April, May and June. I personally like April best as “normally” the big gizzard shad move in to spawn in April and this draws the bigger fish in the lake to those spawning areas in the creeks. These bigger bass moving into those creeks in huge numbers generally runs a lot of the smaller bass out of the creeks. Remember my update from April 2014? The trip where Terry Oldham landed 35 bass over 7 lbs in a half day (morning). On that trip our group landed 4 bass over 10 lbs including a giant 11 pounder! Last April, 2015, the big gizzard shad didn’t move in to spawn due to the constant lake/water fluctuating from unusual rainfall in March. If we don’t receive any unusual rains between now and April, I think we’ll see those big shad move back in…and if they do, OH BOY! BIG BASS BONANZA! ON SPINNERBAIT TOO!!! Of course it won’t matter what you cast at them…but I do love catching big bass on big spinnerbaits. You need to call now before all open dates are gone! For those that prefer more of a summertime pattern, fishing humps, shelves, ledges, etc, then May/June is calling you! Our guides know all the spots where you can sit on one hole and catch quality fish until your arms ache! 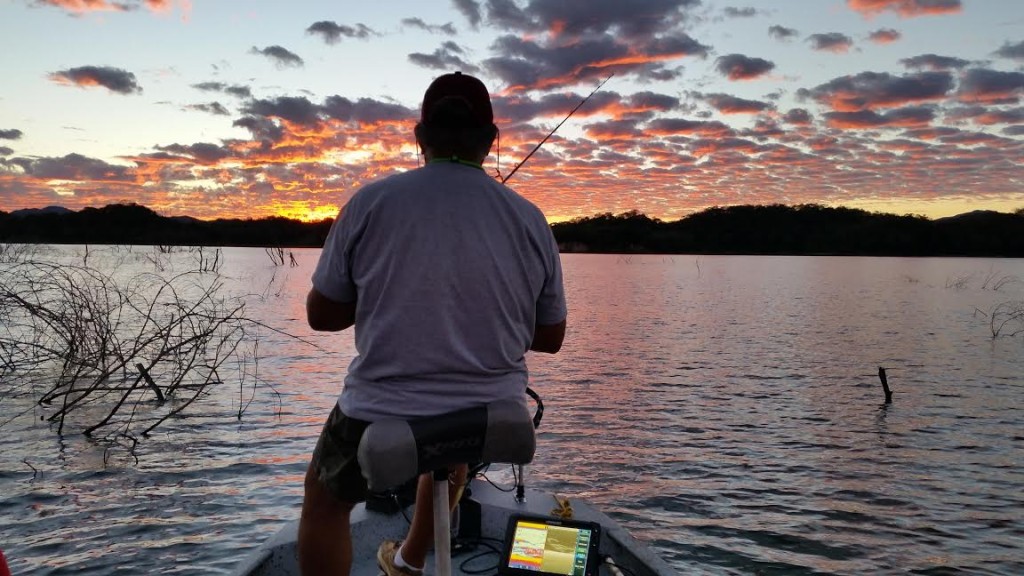 See our next update in early March for the latest on our fishing for giant peacock bass in the Amazon. It’s been an incredible season thus far with a lot of monster peacocks caught…and of course lost. We are also putting together some “exploratory trips” for next season to check out some new water. If you want to join us for these exciting adventures, call us today to get on the list. These exploratory trips have always been my favorite and the most fun!

TAKE ADVOCARE’S SPARK & REHYDRATE WITH YOU TO BRAZIL AND MEXICO!

From time to time, I stumble on to something that I really like and want to share with our customers. For the past two years, I have been taking Advocare’s “Spark” and “Rehydrate” powdered mixes with me on my fishing trips to Brazil and Mexico. I’m always a “sucker” for trying most things once…but it has to be really good for me to fall for it a second time. Well, I can tell you from many experiences, these two powdered mix drinks are AWESOME! The Spark is for giving you that extra boost of energy. It was invented for the exercise enthusiasts but I have found that it also works for those days while in Brazil and Mexico and my body hurts from catching so many fish or I have those “sinking spells” where I’m just totally out of energy. I mix one packet of Spark with 8 oz of water, shake and drink. Within 10 or 15 minutes, I’m a new angler!!! The Rehydrate is for replenishing electrolytes in the body…like after a workout. Well, again…I have found that after a long hot day on the water, whether in the hot humid Amazon catching giant peacock bass or just ripping on that huge topwater lure, I drink the Rehydrate and I’m ready to go again! Body feels like new and refreshed. No worries of dehydration! The Spark comes in an assortment of tasty flavors such as Grape, Mandarin, Fruit Punch, Watermelon, Mango Strawberry, Pink Lemonade and Green Apple. The Rehydrate flavors include Fruit Punch, Key Lime Cherry, Mango Pineapple, Peach and Red Raspberry. You choose whatever you desire but my favorite on the Spark is Grape flavor and on the Rehydrate it is Fruit Punch. We have purified drinking water in all boats, both in Brazil and Mexico…so just bring those small packets of Spark and Rehydrate with you in the boat and mix while fishing. For me, I only drink water while on the lake as beer and soft drinks just don’t quench the thirst. So if I’m going to drink water, might as well add some flavor to it and feel great in the process!

My son Matt is a former football player as well as college baseball player. He is also a workout maniac…a gym rat if you will…Matt turned me on to these two drinks two years ago. He drinks them regularly before and after his workouts… and I do now as well. Some of you may already know about them and use them. For those that don’t and have an interest, then please contact Matt. You can reach him at 903-654-2788 …or contact our office @ 800-722-0006 and ask for Matt as he works for me in the office. He will get you fixed up!