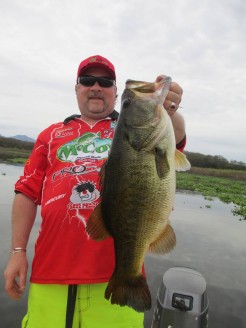 If you want a great chance at catching a big bass, there is still time to get in on the big bass frenzy that’s currently happening at Lake El Salto! This season has seen more big bass in excess of 8 pounds (many over 10lbs) landed than in the past 10 years or longer. The water level has remained higher than in most years due to the active hurricane season the lake endured during the fall months. Added to that, there has been some unseasonable rain in the mountains in late January and early February that caused El Salto (and Picachos) to rise…which is something that rarely happens during this time of the year. Then add in the water hyacinth plants are no longer isolated in the river but scattered in isolated patches and “mats” all over the main lake. I honestly believe it’s a combination of all of these factors that are playing a huge role in why the fishing is so much better this season than in recent years. Many of our customers have returned raving about their fishing at El Salto and talked to me about how they believe having the hyacinths isolated really enhanced their fishing experience. Now it’s no longer a case of trying to “find a needle in a haystack”…and many of the reports we’re receiving are that most of these big bass are being caught within a half a mile or less from our camp! Whatever the REAL reason behind the improved fishing is this season, the bottom line is that the big bass bite is simply on fire at El Salto! Topwater action is on fire as well…but right now it really doesn’t matter what you choose to throw at them…topwater, crankbait, spinnerbait, lizards, flukes…doesn’t matter. They’re biting just about everything in the tackle box! We do not see this changing anytime soon for the rest of the season or until the rains begin in early July. 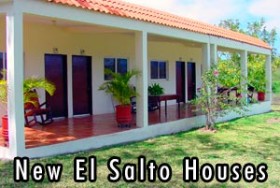 The camp is as beautiful as ever and we altered our menu to match our menu at Picachos. Thick and juicy 1 1/4″ grilled Ribeye steaks, Shrimp/Lobster-fest one night, Mexican food, Shrimp Steak with all the trimmings to include fresh guacamole and salsa prepared tableside. We had a short period with our satellite phone being down but that has been upgraded with a new satellite phone AS WELL as a new antenna/booster so you can use your cellular phone to call home from our camp! Our 18′ Xpress Boats are still the best boats on the lake with the very best guides on El Salto putting you on the bigguns! Lupe is still there and singing his head off. God Bless Lupe…gotta love him. Call us today while the big bite is on! We never know from one year to the next what fishing will be like. Yes, it is always good fishing but we’re talking about the difference in good fishing vs great fishing. This year, it’s GREAT!!! 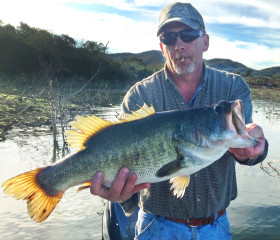 In our last update a few weeks back, we announced that one of our anglers/customers, Scott Moody, landed a Lake Picachos record bass weighing 12 lbs, 14 oz. That same day there were bass of 9 lbs and 10 lbs caught as well. These big toads were spawning bass. In fact, the 12 pound lake record was 90% spawned out or she might have pushed closer to 15 lbs. February is the big spawn month for these western Mexico lakes in Sinaloa…especially at Picachos, El Salto and Comedero. March is typically the “late spawners” doing their thing. Now then…if the next 4 months are anywhere close to what they were last year, get ready for some serious BIG BASS ACTION! If you remember or want to go back and read my updates from last April as well as July, I talk about all the giant bass Picachos produced from March through June or until the monsoon season began in late June/early July. March and April were unbelievable for big bass in excess of 7 pounds using just about anything the angler desired but spinnerbaits were by far the #1 lure. On a trip in late March/early April, I took a group of 7 anglers to Picachos and fished 4 1/5 days. During those 4+ days, we landed an insane number of bass from 7 – 8 pounds to include a half dozen 9 pound bass and also 4 over 10 pounds, with Terry Oldham’s 11 pound giant. The reason for the insane numbers of big bass being caught in late March to late April was due to the big gizzard shad spawning in the creeks. The big bass moved in by the thousands and thus ran all of the smaller bass out of the area. We didn’t have to use the trolling motors much as most of the time we simply tied up to a tree next to a spawning shelf and sat in one place all day catching big bass after big bass until we our arms felt they were going to fall off! That final half day was memorable for Oldham as he was fishing alone that morning. It started off very slow and in fact, at 9 am, it looked as though the bass had moved or just weren’t feeding. At 9:05 am, Oldham spotted a large shad clear the water’s surface which followed by a huge explosion by what looked to be a giant bass chasing the shad. Oldham was approximately 150 – 200 yards away so he turned the trolling motor on high and headed that direction. Once he arrived at the site of the big explosion, he tossed his 1 oz spinnerbait in the direction of where the shad had cleared the water. Within a few seconds, a big bass just about yanked the rod out of his hand and the battle was on….8 pound beauty! Oldham quickly made another cast toward the same spot…FISH ON! This time a 7 pounder! Then came the third and most memorable cast…same spot….fish on! This time while battling the big toad, the entire school of shad was blown up by hundreds of big bass on the surface. Oldham claimed he had hundreds of big bass that looked to be in excess of 7 pounds crashing the trees and even the side of his boat while in a feeding frenzy over the big shad! By noon Oldham had landed 35 bass over 7 pounds…fishing alone! That would be incredible for two or three anglers to accomplish…but for ONE angler, that is flat out a once in a lifetime. Well, I say that…but with this lake, I don’t believe it. I think we can expect similar big bass action again this March/April while those big shad are spawning because the shad, like bass, will spawn around the same time every year.

Now let’s talk about May/June…again, if it is anywhere close to May/June of last year, we should see some incredible big bass numbers being caught. No, they won’t be back in the creeks as the shad will have spawned and the water temps will become too warm. However, those big bass will move to deeper water and feed on main lake humps, points and shelves. This is the same summer pattern bass fishing we have in Texas and most of the southern part of the U.S. each year. Yes, they are a little deeper but not too deep to catch. I really like fishing this pattern each year because we can isolate these big bass better during May/June than we can earlier in the year (season) when the lake is higher and the big bass are scattered. Last May we had our good friend and legendary pro angler Denny Brauer down to sample the lake. Denny and his/our longtime friend Shane Moore fished together on this particular 4 day trip. Both landed numerous big bass up to 9 pounds…mostly fishing plastics in 15′ – 20′ of water. Denny and Shane were so impressed that they’re returning again this May with a host of friends. Moving on to June…again, you can go back and read my July update about the great fishing for big bass that we experienced in June and our friend and legendary pro angler Jimmy Houston landing bass of 11 and 12 pounds…along with numerous 6 – 8 pounders! Same pattern as May…fishing deep running crankbaits and plastics over humps, points and shelves. Once again, these bass were isolated as we had their feeding honey holes located which made it very easy for the anglers. This year, with our new Xpress bass boats having Lowrance sonars with downscan and capability to make all of these “honey holes”, it will be even more easy for our anglers to catch them. All of our guides know these spots and have them marked. 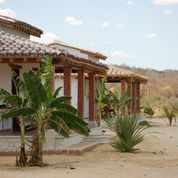 On Picachos, for most of the season leading up to TODAY, there have not been a lot of bass over 7 pounds caught and in fact most are ranging from 1.5 lbs to 3.5 pounds. The reason I BELIEVE for this is simply due to the lake continuing to get runoff from unseasonable rains in the mountains, which keeps the lake level higher than normal and the big bass scattered. We even had some snow in the mountains above Picachos in early February that once it melted and fed into the lake, dropped the water temperature on the lake’s surface as much as 8 degrees. That will definitely cause your bigger bass to head to deeper water…and it did just that for about 10 days to two weeks. Now, things seem to be settling in to the “norm” for this time of the year with the temperatures getting warmer every day and lake falling every day as they pull for irrigation. We’re already seeing (in the past 4 days) some bigger fish showing up with consistency in our customers’ catches. It’s almost here, folks…BIG BASS TIME! I can’t wait! 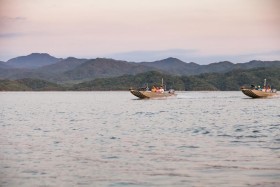 Remember, we were the very first sportfishing operation on Picachos and have the most experienced fishing guides along with the nicest and biggest lodge and restaurant on the water! We were the first to start fishing this lake and know it better than anyone. We also have the nicest and best bass boats on the lake equipped with 60 HP Yamaha 4-stroke motors as well as Minn Kota 70 Edge-Pro 24 volt trolling motors. The best boats on the lake!!!

RSJA OFFERS COMBO TRIPS FOR BOTH EL SALTO AND PICACHOS!!! 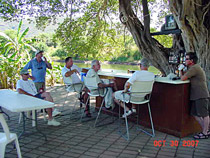 Under the giant Capuli tree at El Salto

If you want to increase or double your chances at big bass in the coming four months, you should seriously consider fishing both El Salto and Picachos in the same trip! As I’ve already stated, we’re having one of our best seasons ever for big bass at El Salto and we do not see that changing before the monsoon season begins in late June or early July. Picachos’ big bass time is just about to begin…if it’s anything like last year in March – June. We offer you a chance at both of these great bass lakes in the same trip. You can fish two days at each lake or however many days you desire….at each lake. The lakes are only 1.5 hours drive apart…on excellent paved roads! It’s not rare to have two great bass lakes within driving distance of the other…but it is rare to have great fishing in THE SAME SEASON in two lakes this close to the other! This year provides our valuable customers an amazing and rare opportunity to get great fishing at two different lakes…in the same trip! Don’t miss out…CALL US TODAY! 800-722-0006