That’s right folks…we have ourselves a new lake record at Lake Picachos! Scott Moody from North Carolina, landed a giant 12 pound, 14 ounce hawg last Friday morning (Feb 5)! The big sow was almost spawned out or she might have weighed in at well over 14 pounds! Still, she was big enough to set the new lake record, which previously had been 2 over 12 pounds…one by legendary pro angler Jimmy Houston and another by a local sportfisherman from Sinaloa, Mexico. Scott’s new lake record measured 28″ long x 23.5″ in girth. He and his fishing partner captured the entire battle on video while using a GoPro video camera. We will put that video up on our site as soon as we receive the footage. 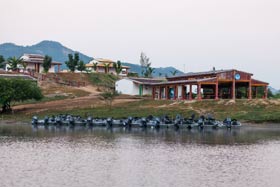 The bigger fish are definitely moving up from deeper water with the February spawn as well as the March spawn just around the corner. Then of course the big gizzard shad will start spawning around the end of March and this will last through the end of April before the big bass move to the main lake and settle in on their summer pattern. All of this meaning the next five months (Feb through June) is BIG BASS TIME! Remember last year when pro angler Denny Brauer slam dunked the big bass on Picachos in May…then a month later in June, pro angler Jimmy Houston filmed 6 shows on Picachos and landed numerous giants to include bass of 11lbs and 12lbs! If you want to know what to expect in April, I strongly recommend you go back in our blog/newsletter archives and read last April/May editions. BIG. BASS. FRENZY.