This was certainly a season to remember at Lake Comedero….one for the ages! It’s not that the lake hasn’t always been great and especially for trophy bass, but this one produced numbers of bass over 8 lbs like no other season in years past! It’s been since the first of February since my last update…and it hasn’t been due to nothing to write about but rather I’ve been in Mexico more than here in this office! So let’s start where I left off last….

February 3rd, I headed down to Comedero with a longtime friend and guy I fished many tournaments against in the past (I kicked his butt), Jeff Abernathy. Jokes aside, Jeff is an outstanding angler and even better person. I was really looking forward to fishing with Jeff again and the joy of wrecking some big ol’ bucket mouth bass on Comedero! Jeff had fished Comedero with me a year ago and landed a couple of 10 lbs giants! So he was familiar with the lake. 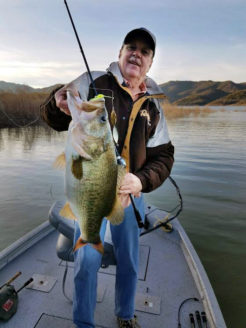 We went in ahead of a big group I had arriving Comedero on February 6, in hopes of establishing a big bass pattern. It didn’t take long on the first day to figure out what those bigguns were doing….the same thing they were doing in January….ledges near points in 14′ – 18′ of water! It also didn’t take long to establish the best lure(s)….Oldham 1 oz jigs w/Strike King Rage Tail Rage craws as trailers. Also the Oldham 3/4 and 1 oz spinnerbaits were working pretty darn good as well. The first day was just checking various areas of the lake to see which area was “hotter” and producing better. That would end up being the river as well as the San Jose tributary. On the first day we landed 80 bass with the largest weighing 8 lbs, 10 oz, with many bass in the 6 and 7 lbs range….and of course, lost some giants. It was on the second day that we really put things together and wrecked some big fat toads! We landed less bass on the second day but a lot more big bass. We landed bass of 9.10, 8.9, 8.3, 8.2, 8.2, 8.0 and also landed 7 bass of 7 lbs and 11 bass of 6 lbs!!! This doesn’t take into account the giants lost! 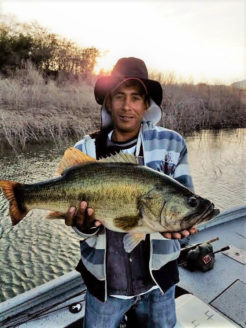 One particular stretch of 45 minutes on this day was one I’ll remember forever….something happened that an angler doesn’t experience too often in his/her lifetime. Jeff and I were fishing way up the San Jose tributary on one of those sharp defining points with 40+ feet of water on the front side break and 60+ feet of water on the backside. It had a ledge of about 10′ all around it before breaking off into deep water. We were fishing the backside ledge and I tossed my 1 oz Oldham Tilapia colored jig w/Rage Craw up on that ledge. It didn’t get to the bottom good before one took off with it. I set the hook and immediately knew I had a “net fish”….at least 8 lbs or larger! I battled the big sow bass to the boat and just as she appeared close to the boat, I saw SWARMS of huge bass around her trying to take the jig away from her! I yelled to Jeff, “Throw your jig behind her….there are more bigguns behind her!!!”…Jeff tossed his jig right behind her and it didn’t hit the water but a second and a big hawg had it! We both landed our big fish…mine weighed 8.2 and Jeff’s weighed 8.0. 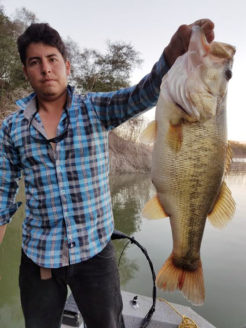 After weighing the bass, we were ready for hopefully another tag team double. This time I told Jeff to cast first and I would wait with jig in hand to throw in behind him. After he made his cast, a big one had it and I was like a bird dog on point ready pitch my jig behind his bass…and sure enough, as soon as his big bass appeared near the surface, there were swarms of giants around his bass trying to get that jig away. I pitched in behind his bass and WHAM…my rod went straight down and my drag started smoking! ANOTHER BIG BASS DOUBLE! Jeff’s weighed in at 7 lbs and mine weighed in at 9 lbs, 10 oz…which would end up our biggest bass of the day! This incredible fury of swarming bass and big bass doubles for Jeff and I went on for about 15 minutes in that ONE SPOT. We then fished our way to the end of the point and the incredible swarming actions resumed…but there was a thicker patch of heavy brush on the point and we ended up losing and having to cut the braided line on several occasions …which seemed to ruin the feeding frenzy on that point! It was truly an incredible 45 minutes of fishing and the day’s number of big bass were just as amazing! 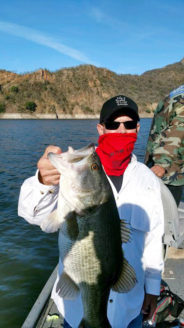 The big group arrived that Monday, February 6th. They really didn’t know what was in store for them but Jeff and I gave them a lure/pattern update that night…which resulted with most of the group rigging their rods with heavy braid and Oldham jigs w/Rage Craws! That first morning of fishing for the group, Paul Lee was fishing with his partner Lloyd Godbold. On Paul’s 3rd cast of the morning…the first morning…Paul landed a beautiful 12 lbs, 3 oz hawg! After weighing the giant bass and a few high five’s, he and Lloyd resumed fishing the same line of brush. It was just a little less than 30 minutes later, Lloyd tied into a giant of his own….a twin? Maybe…his giant weighed 12 lbs, 2 oz!!! Wow! Now how many times have you ever heard of two anglers catching two 12 lbs bass in 30 minutes??? I’ll bet it hasn’t been often…and for most….NEVER. EVER. This group of 9 anglers absolutely had the time of their lives catching lots of big bass daily. Every angler in this group landed at least one bass of 7 lbs but most had bass of 8 lbs are larger. Michael Novy, who has fished with us in Brazil and El Salto in the past, was hoping to top his all time best of 8 lbs…and he did just that when he landed a 9 lbs, 2 oz bucket mouth!

Comedero continued its hot big bass fury throughout February with many anglers landing bass up to 11 lbs…and just an insane amount of 7 – 9 lbs bass! Then came March 3rd…George Harris and David Thompson (Both of Illinois) landed bass of 10.8, 8.9, 8.2, 7.5, 7.4, 7.2 and 10 others in the 6 lbs range! That was a WRECKING DAY!!! ALL of their big bass were caught on Oldham 1 oz tilapia colored jigs with Strike King Rage Tail Rage Craws as trailer! Then came full moon week. The final spawn of the the year! My brother, John Speed, who is a football coach in Dallas and only gets to fish Mexico one time each year during Spring Break (March), took his group of 8 anglers to Comedero for some big bass action. Steve “Big O” Parks of Rage Tail was also there fishing with our longtime customer and dear friend Mike McGowan of Oklahoma. It was this trip that things seem to change from January and February….the jig was NOT the best lure but rather that big 1 oz Oldham spinnerbait! Those big bass had actually moved ABOVE the brush and had settled up in about 8′ – 14′ of water. Making it much easier to contend with those Comedero giants and a better chance of landing. Big O established this awesome spinnerbait pattern on the first day of their 7 days of fishing. He and Mike McGowan had 17 bass over 7 lbs that first day and 11 over 8 lbs! The rest of my brother’s group dropped the jigs and picked up big spinnerbaits. That’s when everyone started catching the bigguns! My brother ended with a top 5 of 12 lbs, 8 oz, 12 lbs, 10 lbs, 2 oz, 10 lbs, 1oz and 9 lbs, 8 oz. In fact, his 12.8 and 9.8 came on back-to-back casts in the Chupadero cove! The same day he landed his 12.8, Big O landed a 11 lbs, 6 oz toad! Big O and Mike wrecked so many bass each day over 8 lbs for 7 days straight that he (Big O) is now referring to the Oldham spinnerbait as the Spinna-Whacker! It WHACKS ‘EM on Comedero! While I like the catchy new term, I seriously don’t believe Oldham will be changing the name anytime soon. 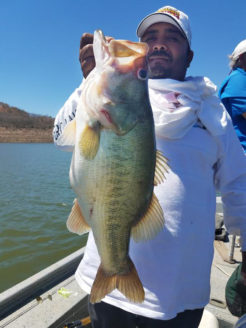 Finally to put the icing on this amazing season on Comedero, I traveled to the lake in late March for a last HOORAH! This time I had our good friend and owner of Fishin’ World in Dallas…Mr. Rob Carter. Also making the trip was Steve Knight of the Tyler Morning Telegraph newspaper, Mike Leggett of the Austin American Statesman newspaper, Terry Oldham of Oldham’s Lures and Adam Zinsmeyer group of 4 from Castroville, TX. Since Big O had already returned home from Comedero a few days prior to our arrival, we had the benefit of getting the great spinnerbait report. So what did we tie on for that first day? Doh….spinna-whacker? You got it! For 6 days we hammered big fish after big fish AFTER BIG FISH…on the Spinna-Whacker! One day Oldham was determined (and stubborn) to prove the 1 oz jig would still work…and he somewhat proved that up as he landed 41 bass of 6 lbs! Yes, 41 bass of 6 lbs!!! Problem is, he didn’t have a bass over 6 lbs. Still that was truly amazing and Steve Knight was in the boat to back up this incredible catch! That stubbornness cost him the last day as Terry and I fished together. I was not stubborn and stayed with my reliable 1 oz OLDHAM spinnerbait…yes, he makes it but would not use it. Terry stayed with his reliable jig. I landed bass of 10.1, 9.2, 4 over 8 lbs, 5 over 7 lbs and too many 5’s and 6’s that I didn’t even try to keep count. Terry was able to land some bigguns including a 9 lbs, 13 oz…but he caught it pitching in behind one of my 8 pounders I had hooked on his spinnerbait! 🙂 It’s not often that someone beats Terry on the water for bass…and I’m not sure I really beat him but rather he beat himself….STUBBORN CUSS!!!

Jesus is all smiles posing with yet another Comedero trophy! (please click to enlarge image)

Okay my friends…let’s talk serious. For next season….you MUST CALL ASAP if you want to experience the amazing big bass action on Comedero. Due to our last 3 months of updates and the incredible numbers of big bass caught this season, We’re about to fill up the entire season next year! We are adding more housing for next year and a few more boats. Still, a Wait List has already been started for “some” dates. If you don’t want to miss out, you MUST call us soon….NOW. Right now I believe Comedero to be THE BEST TROPHY BASS LAKE IN THE WORLD! Steve Parks of Rage Tail, who is one of the best bass anglers I’ve ever had the privilege of fishing with and has many bass up to 15 lbs on his resume, agrees and has stated on his website many times recently that he believes Comedero to be the best big bass lake in the world! Most of our customer groups that fished Comedero this season have already called to rebook their trip for next season! The buzz is real…because the reports and big bass catches are REAL.

CALL US TODAY TO BOOK YOUR BASS FISHING TRIP OF A LIFETIME!!!