I just returned from a 3 week stay at new and fabulous Lake Picachos! This lake continues to amaze all who have fished it…to include legendary pro angler and longtime TV fishing celebrity, Jimmy Houston! Jimmy arrived June 15th to see what all the buzz was about with Picachos. I informed Jimmy prior to his arrival that the big bass were on a true summer pattern and very few, if any, should be expected on spinnerbait. We all know how Jimmy loves a spinnerbait. These big bass were primarily on main lake structure…humps, shelves, ledges, etc. in about 15 – 20 ft. of water. No problem for Jimmy as he can fish it all. The first afternoon of fishing, Jimmy and his partner Dale Morrell landed over 50 bass up to 6 pounds on lizards and crankbaits…this in about 4 hours of fishing. That was just a little warmup for what was about to happen over the next few days. The second day (morning only), Jimmy and his fishing partner, Terry Oldham, landed over 60 bass on 7” Super Flukes, Lizards and crankbaits…with the largest being a 11 pound beauty that Jimmy caught on a Fat Free Shad crankbait! He and Terry also landed numerous bass up to 6 pounds with many in the 3 – 5 pound class! That afternoon, I personally filmed/fished with Jimmy, using crankbaits ONLY…no plastics, nothing else. We landed well over 50 bass that afternoon with the largest being close to 5 pounds. Many times we were “doubled up” with each having bass on! In fact, while Jimmy was landing a fish, I pitched my Fat Free Shad crankbait right behind the bass he was battling and hooked up with a nice 3 ½ pounder! While we didn’t land any lunkers that afternoon, we had a blast catching numbers of quality bass! We also enjoyed getting to fish together for the first time in 14 years…the last time being March 2000, on Lake Comedero, Mexico! It was truly special getting to fish again with my longtime and great friend! 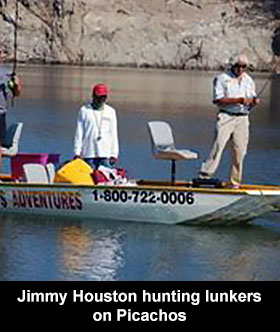 The next morning (Day 2 of 3), Jimmy and his longtime friend and a well-known name in the fishing industry, Dick “Buck” Berryman, were fishing topwater lures early. Jimmy had a big bass blast his topwater and miss…Buck had a super fluke tied on and threw toward the big bass blew up on Jimmy’s lure…FISH ON! Buck landed the fish…a 7 ½ pounder! Buck also landed a fat 8 pounder later in the morning while fishing a 20’ shelf up the river! By noon, the two had boated 57! Jimmy finished the day with well over 100 bass but would have had more if not for the monsoon season just starting and interrupting fishing in the afternoons every day. We’ll get to the “monsoon” a bit later.

On Day 3, Jimmy headed back to the big shelf on the main lake where he had already boated numerous 6 and 7 pound fish to include the 11 pound giant. Just as before when he caught the 11 pounder after 11 am and just prior to lunch, he locked in to another big hawg! This time on a 6” plum colored worm. When Jimmy felt the bite and set the hook, his rod went straight down…fast! Jimmy knew this wasn’t a 6 or 7 pounder…no sir! This was one of the strongest bass he’s ever hooked! After a few powerful surges by the large bucketmouth, Jimmy finally got the fish close to the surface where he could lay his eyes on this baby. Oh yeah! Another MONSTER! His guide “Placido” scooped this beauty up in the net and it was time to break out the camera and scales! This bass tipped the scales at just over 12 pounds! The lake record was an ounce heavier but this was a trophy of a lifetime in anyone’s book!
Jimmy ended the trip with tons of great footage that will be aired on his show in the coming season(s)! We’ll keep you posted on when these shows air! Meanwhile, Jimmy had some great compliments about the lake, our beautiful new lodge and service. Here are a few…

“This is one of the best bass lakes I’ve ever fished and I plan on returning every year while it’s hot!”
“The new lodge is first class all the way and the view of the lake and mountains from the lodge is breathtaking”
“The food is the best I’ve ever experienced in a fish camp and I’ve been in fish camps all over the world”

There you have it folks…from the Legend himself!

Let’s touch on the lodge and service for a minute….
This lodge is the first on Picachos and at the time of this update, the only lodge currently operating on the water! There will be others coming…we know that. However, this lodge facility is and will continue to be second to none. Each house has it’s own private and single bedrooms with your own A/C unit , that will freeze you out if you so desire…two per house with a shower/bath. Each house also provides a living room area with a sofa, chair and coffee table. Each house also offers a kitchen area with sink and min-refrigerators…all loaded up with your choice of drinks. Coming soon we’ll have flat screen tv’s in each house (living room area).

Also, the restaurant and dining room facility is HUGE and can accommodate up to 40 people or more. There’s already a huge flat screen tv in the dining facility so you don’t miss your favorite sporting event or news from back home. We have also just added Internet to our Lodge so you are able to check emails and communicate back home.

The food….believe me when I tell you this but it’s second to none. Ron Speed Jr’s Adventures has upgraded it’s menu and our customers who have been with us to Lake Picachos already are raving about our food. We have found the best place to buy the best ribeye steaks…found anywhere in the world. No joke! These steaks are carefully marinated and grilled over open fire on our big and newly built grill. We also offer a seafood-fest one night with shrimp prepared three different ways …all delicious. That same seafood night we offer huge Lobster tail. This of course when “In Season”…and of course you can’t go to Mexico and not experience one night of a true authentic Mexican dish. So yes, expect to have a tasty local dish served as well. We’ve also added homemade Guacamole…prepared right at your table side…and prepared for your taste (mild, medium or spicy). Your waiter will also prepare at your table side, a homemade salsa that is one of the best I’ve ever tasted! Last about the food…many of our customers over the years have requested that we offer homemade burgers and hot dogs for one or two of our lunches, rather than having fried fish every day. So guess what? Yep…we’re serving giant Angus burgers and dogs from the grill for one of our lunch meals. Oh and desserts…again, second to none! Everyone is raving about our homemade bread pudding with ice cream…and rightfully so! It’s mouthwatering delicious! We also offer a tasty creamy Spanish Flan as well as various homemade cakes and pies. You’ll be hard pressed to find a fishing camp/Lodge anywhere in the world with better food! Just ask Jimmy Houston!

As stated earlier, the monsoon season arrived in mid-to-late June. The first few days did not impact the fishing but after nearly a week, the lake started to rise. This had a major impact on fishing the last week of June as we saw the total numbers per boat/per day cut in half and the big fish all but disappear. This is really not that surprising as we’ve seen this happen on other lakes in western Mexico over the years. The only question is “WHEN” will the rains begin and what days/week will be adversely affected on the fishing? Well that is something that cannot be predicted or guaranteed. Unfortunately. The good news is that this tough fishing period lasted no more than 10 days…and during that 10 tough days, the lake level in Picachos rose approximately 8’. What I knew would happen, certainly happened. That after a week to ten days, the algae would start to grow on the fresh green vegetation that the water had covered and the Tilapia and shad would show up to feed on that algae. Naturally with the Tilapia and shad in the shallows feeding on this algae, the bass wouldn’t be too far behind…and they weren’t. The bass just needed the water temps to cool down before moving shallow. Well, when I arrived Picachos on June 11th, the water temps near the mouth of the creeks were ranging from 89 – 91 degrees. When I left Picachos on June 4th, the water temps were ranging from 83 – 85 degrees…and guess what? You got it…bass were in there and biting spinner baits once again! My last day of fishing I landed a beautiful fat 8lbs 10 oz bass on Oldham’s 1 oz spinnerbait in 6’ of water!!! The group I left at the lodge that had two more days of fishing left, ended up boating well over 100 bass per day, per boat and numerous 3 – 6 pound bass…all on spinnerbaits, topwaters (mostly buzz baits) and Zoom 8” lizards! So with the water temps cooling down and bait fish and bass in shallow water, IT’S ON AGAIN!!! At the rate the water was rising when I left Picachos, it should be nearly full by early August…if not before then. The water level, when full, will be right up to our restaurant so you can step out of your boat and sit down for a drink and meal a few 30 steps away! The rains usually arrive late afternoon…sometimes they last till dark and into the night, sometimes they chase us off the lake (due to lightning) for 45 minutes to 1 hour. Still, our customers are getting a minimum of 8 hours of fishing in before the storms arrive in late afternoons…and many days they get a lot more than 8 hours. So don’t put off till later what you can get RIGHT NOW! The monsoon season “usually” last till late August or early September. Remember the lake record 12lbs bass was caught last year on September 1st….in SHALLOW WATER!!!

Call us today so you don’t miss out on fishing fabulous Lake Picachos while it’s at it’s best! Most of you know these new lakes don’t stay new for very long. If you want to catch this lake while it’s at it’s best and red hot, you need to get there SOON! We have the first lodge on the lake…the largest and nicest lodge and restaurant facility on the lake…and we offer THE BEST food and service of any fishing camp in the world! Oh and most of our guides already have 6 months of training for boating safety, guided fishing and working for American sportfishermen! In other words, we’re ahead of the pack that is surely going to be coming and jumping on our bandwagon! Book your trip today to enjoy Lake Picachos the Ron Speed Jr’s Adventures way!!!
Good Fishin’,
Ron Speed, Jr
1-800-722-0006