As predicted in my last update a few weeks ago, there is BIG news to report from all three lakes. Never in my 30 years have I seen bass fishing this good on multiple lakes at the same time. It’s truly remarkable and a blessing that most anglers do not have the opportunity to experience in a lifetime. Lakes Comedero and El Salto are kicking out a lot of big fat hefty bass and Lake Picachos is not only continuing with it’s insane numbers but also showing the average size continues to grow and more numbers of bigger bass are showing up. I’ll break down all three lakes in this update. Please continue reading…

It was the final day of a 10 day fishing schedule. I arrived lakeside around 2 pm where the bass boats are located near the dam. I was all set for the final afternoon of battles with some big “toads”…Comedero giants. Steve “Big O” Parks and Terry Oldham were already there and ready to go as well…just waiting on me. Big O was sitting on a rock along the shore just staring down at the ground. He had this distraught “I just got my butt whipped” look on his face. He and Terry had fished that morning without me as I took a half day break to just relax and enjoy the surroundings. I asked Big O why the sad look on his face? He replied, “I’m sick…I could throw up…I had my shot and now it’s gone…I blew it!”….I immediately started laughing and then turned to Oldham and asked him, “What’s up with Big O? What’s wrong with him?” Oldham replied (while laughing), “Oooooh, he got a hold of a monster that hurt his feelings bad”…I began laughing again and then turned to Big O and said, “WELCOME TO THE CLUB, AMIGO!”….of course I was referring to the giant and potential world record bass I lost a year ago on Comedero. 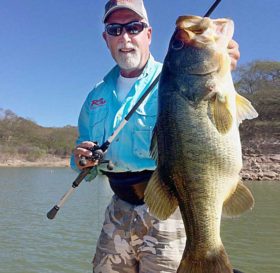 Big O had matched up with one of those Comedero giants I have written and talked about numerous times in the past. Now, it’s one thing for the average fishermen to match up with a Comedero giant of this elite status and lose the battle…but for Big O, it’s quite an accomplishment…for the bass. Big O isn’t your everyday garden variety bass angler. He’s a true professional in every sense of the word. One of the best bass anglers and outdoorsmen I’ve ever had the privilege of fishing with in my lifetime. Big O has a 15 lbs bass on his resume and caught numerous bass from 10 lbs – 13 lbs. In fact, he has landed so many bass of that size in his lifetime that he very seldom shows any emotion when he lands a big bass of 10 lbs or larger. So you get the point I’m trying to make here with regards to this giant he had lost that last morning. He wasn’t just emotional….no….you would have thought he was a young boy who woke up Christmas morning to find that someone had invaded his home in the middle of the night and stolen all of his gifts from Santa.

We loaded into the Xpress boat and pulled away from shore. I asked both where we’re going to start fishing? Big O quickly responded before Oldham, “RIGHT BACK TO MONSTER POINT!” Okay…to monster point we go. We pulled up to the point, one I knew well and had caught (and lost) many giants in the past. Before the trolling motor even entered the water, Big O was already telling the battle story…giving every little detail and pointing to little “stick ups” and bush tops as reference points on where to flip my 3/4 oz Oldham jig w/chartreuse pepper Rage Craw. The best lure/plastic combination of the 10 days for landing big bass! I was fishing from the rear of the boat…which meant I was getting boat fronted like a rented mule. That’s ok…I wasn’t THAT mad at those bass. I had already landed countless number of 8’s and 9’s in the 10 days. Still, I wouldn’t mind another shot at a lake or world record. After about 10 minutes of watching Big O and Oldham flip to the area he hooked the monster, Big O (running the troller) decided that maybe the school of bigguns had moved a short distance and he moved the boat about 20’…just perfect for me to finally get my shot at the monster hole. Granted it was from a different angle and direction but nevertheless, I was able to reach the “honey hole”…on the first flip, I felt a major “THUMP” and my 80 lbs braid started moving sideways. I returned that thump with a vicious hook set and immediately felt my 7′ 6″ Dobyns flipping stick double over. I knew it was a “quality” fish….understatement of course. I was fortunate to be able to get the big bass’ head coming up and within a few seconds, she cleared the water….OH YEAH, THIS IS A DANDY! Oldham grabbed the landing net and she was courteous enough to cooperate. I figured the bass between 9 and 10 lbs. After a quick check with the scales, she weighed in officially at 9 lbs, 8 oz. Big O yelled, “RON JR’S ON THE BOARD!”…a common theme we used for the 10 days when Oldham or Big O or Ron Jr would land a bass of 8 lbs or larger. About 10 minutes later and 30 feet away from the honey hole, I would get on the board again…a fat 8 lbs, 2 oz toad! Not bad for a Texas country boy fishing behind two “seine nets” in Oldham and Big O. After another 20 minutes and no bites, Big O decided to head straight across to the other side of the channel and a well known point that’s produced many giants in the past. We had not fished this point nor this area of the lake in the previous 9 1/2 days of fishing…but we were about to find out if it’s ON. We pulled up to the point and before Oldham and I could get a flip away, Big O was locked up with what appeared to be a “board” qualifying bass. This fish also cleared the water and it was then we knew Big O was about to get on the board for the afternoon. This bass was just shy of 10 lbs…a 9 lbs, 14 oz beauty! Not long after releasing the hawg back to the water, Oldham got on the board with a fat 9 pounder. Then Big O got back on the board with another 9 pounder before Oldham had even released his fish. Yeah, this area of the lake is definitely ON, ON, ON! We moved to another secondary point not 100 yards away and Oldham was back on the board. I think my showing them up from the back of the boat with those first two hawgs of the afternoon irritated them a little…or motivated would be a better word to describe it. This went on until time to head in near dark. One board fish ( 8 lbs and bigger) after another. It was insane…but a reflection of what we had just spent the previous 9 1/2 days experiencing. 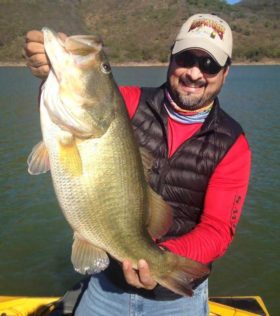 Earlier in the week we hosted the top bass fishing show in Mexico (Vamonos de Pesca) with hosts Edgar Tellez and his son Edgar Jr…AND their great camera/video specialist Javier Rodriguez. I had met Javier in the past at Picachos while filming some Rage Tail products, but had never met Edgar Sr and Jr. Talk about three great people and top notch anglers. Edgar and Edgar Jr were there to film the great trophy bass action they had heard about Comedero. Making their first trip to the lake, the plan was for Edgar Sr and I to fish together the first day, while Edgar Jr and Big O fished AND filmed together. Big O took Edgar Jr to one particular area of the lake that he and Oldham had found a large concentration of big bass…mostly 8 lbs and larger. It was a huge area covering 1/3 of the 34,000 acre lake. Making certain to not “wreck” any particular hole or point, they would just check each spot, catch a biggun and then move on. Even just spot checking these points in this area, Oldham and Big O were averaging between 20 – 30 bass per day over 8 lbs alone….yes…let me repeat that….BETWEEN 20 – 30 BASS PER DAY OVER 8 LBS ALONE! That’s IN. SANE. FOLKS. INSANE!!! Fast forward to the first day of filming with Edgar Jr and Big O….Big O knew the bass in this one particular “spot” had been hitting spinnerbait early until about 8 or 9 am. So what did he opt for first? You got it….a 1 oz Oldham spinnerbait with a Rage Eliminator as his trailer. After several 6 and 7 lbs bass captured on film, Big O tied in to a REAL Comedero giant on the Oldham spinner. After a fierce battle to keep her out of the thick thorny brush, he landed this monster…a ridiculously extra fat 11 lbs, 13 oz HAWG! Edgar Jr and Big O ended up filming two shows that one day and over 10 bass weighing over 8 lbs…all captured on video!

In a different part of the lake, I was fishing with Edgar Sr…trying to introduce him to one of those Comedero monsters. Around 10:30 am, Edgar landed his first Comedero “board fish” …a beautiful 9 lbs, 13 oz pig! Edgar knew it was going to be a memorable trip when he flirted with a potential 10 pound bass on the first morning of a 4 day fishing experience. Both Edgar and Edgar Jr continued to reel in 8 and 9 pounder after 8 and 9 pounder over the next few days. At one point, they could look down at the sonar we have on the front of the boat (on all boats), see what they believe were big bass, flip straight vertical and catch a biggun. Again, it was truly insane. Both told me they believe Comedero to be one of, if not THE BEST trophy bass lake in the world! Big O, the king of big bass along with Terry Oldham, both consider Comedero to be THE BEST big bass lake in the world. In fact, you can read Big O’s comments on his latest Rage Tail update on their website and Facebook page. I am certainly in agreement and have been stating this for a long, long time.

As many giants as we landed (and of course lost too many too count), I believe the best is still yet to come this season. The lake caught full last summer from the monsoon season. That’s great news for the entire season as a whole….but the lake fishes better, especially for 10 lbs bass and larger, when it’s dropped at least 20 feet from full pool. That hasn’t happened yet as the lake is about 8 – 10 feet down from full pool. As normal for this time of year, they’re pulling the water approximately 4″ per 24 hours and by March, this lake is going to be absolutely on fire with big fish….as if it’s not already on fire? Well, let’s just say it’s going to get better…if that’s even possible? Point being, there is still time to get in on the big bass action at Comedero THIS SEASON. You MUST STRONGLY consider getting to Comedero before the end of the season as we never know from one year to the next how much rain we’ll get in the summer monsoon season. All we can say right now is that it’s absolutely incredible….RIGHT NOW. We do not foresee that changing before the end of the season. As Big O and others can attest, there are some real MONSTER BASS in this lake! I’ve had my shot…Big O had his shot…many others have had their shot….now it’s time for YOU to come take a shot! Call us TODAY!

CALL US TODAY TO BOOK YOUR BASS FISHING TRIP OF A LIFETIME!!!