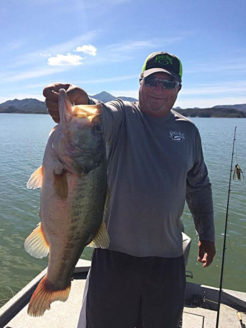 Denny Brauer with one of his many Comedero Hawgs (NOTE: some images on this page can be viewed larger by clicking on them).

I know I stated in last week’s Lake Comedero and Mexico Update (Part I) that I would follow up with Mexico Update Part II on Lakes El Salto and Picachos next. Well, it’s coming in a day or two but with what’s currently happening at Comedero is just too amazing to wait on reporting. If you haven’t read my update on Comedero last week regarding my recent trip, then do so prior to reading THIS UPDATE!

A week ago, legendary pro angler Denny Brauer and Shane Moore headed to Comedero for what they hoped would measure up to the fantastic big bass experience they enjoyed a year ago. If you go back and read that report from Jan/Feb, you will see that Denny had claimed he had the best day of flipping/pitching in his lifetime of bass fishing. That is saying something considering Denny is known by many to be THE BEST flip/pitch angler…ever! Well, guess what? Denny just returned from Comedero and has a NEW claim…”I just experienced the best day of flipping/pitching and bass fishing of my life”….yep, last week he and Shane had a day that topped last year’s memorable one. Each day Denny, Shane and their group of 12 anglers caught numerous bass in the 7 – 8 lbs range. The first day saw the group land the largest bass of the trip that weighed 11.02 lbs. Over the next two days, two more double-digit bass of 10 lbs+ were hauled in with numerous bass of 7 – 9 lbs caught as well. Then came the final day….one that Denny and Shane will NEVER forget! Last Friday evening, I received a text message from Shane as he and the group were traveling back to Mazatlan from Comedero. He told me he would call me on Monday after he arrived back in his office but wanted me to know in advance that he and the group had a GREAT trip but he and Denny had an unbelievable final day of fishing. I couldn’t wait to receive that call Monday morning and get the scoop on this “unbelievable day.” Monday morning arrived and Shane called me bright and early. I could hear the excitement in his voice. Shane said, “Ron, there’s simply not a bass lake in the world that compares to Comedero for big bass PLUS numbers to go with them.” He is right in that his group averaged 100 bass or more per day on Comedero and most anglers weren’t even trying to catch numbers but rather target big trophy bass. Shane then gave me the juicy bits I had been waiting for about his and Denny’s final day of fishing…“Ron, no lie…no fish story…Denny and I had 35 bass over 7 lbs that final day…but of those 35 bass over 7 lbs, 21 of them were over 8 lbs!!! Our largest was 9.2 lbs but Denny and I both landed a bass that big!” Shane then went on to tell me that a lot of the bass they caught were spawned out from the January spawn bass. Imagine what those bass had weighed a week or two earlier? I asked Shane, “So if this happens two weeks earlier, are you telling me you would have caught 21 bass over 9 lbs? Over 10 lbs? He responded, “Yep…that’s exactly what Denny and I were discussing on the way home. That believe it or not, as great as it was, that’s the only way it could have been better.” 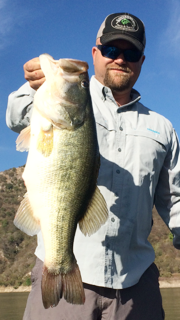 Shane Moore with one of his 21 over 8lbs caught his final day on Comedero. (NOTE: some images on this page can be viewed larger by clicking on them).

Later in the conversation, I asked Shane if he got hooked up with one of those true Comedero Monsters that some of us have battled…and lost? He then responded with, “Oh man, Ron…this one day, I was fishing with Denny on a point I’ve caught a lot of big bass in past years. This one hit my jig and I set the hook hard. I’ve learned since last year fishing the thick brush in this lake that you better get that rod high and keep their heads coming straight up in order to have a chance. I went straight twelve o’clock position with my rod and immediately my rod went straight six o’clock! That bass almost ripped the rod from my hands! I held on to the rod but the bass left my jig in a bush after taking drag and tearing through several of those bushes…after I knew the fish was gone, I just stood there quietly while bent over wondering what just happened?” Denny then asked Shane, “WHAT WAS THAT???” Shane said he replied, “I don’t know but it just kicked my butt!!!” 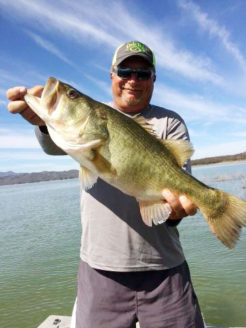 Denny Brauer with another of his Comedero Beauties. (NOTE: some images on this page can be viewed larger by clicking on them).

So now we can add Shane to the “Welcome to the club, Amigo!“…which if you’ve read my last update, Steve “Big O” Parks recently got added along with Terry Oldham, Ron Jr and many others that recently got their hearts broken by one of those Comedero Monsters! Sooner or later, someone is going to get one of these beasts in the boat and when it happens, there could be a record (or two) broken. It’s no fish story, folks…there are some incredible giants in Comedero. This lake is not only producing more numbers of 7 – 10 lbs bass than any lake I know of in the world, but also producing some great overall numbers period. The reason this lake has it ALL is because it’s 34,000+ acres (when full) with very little fishing pressure. The commercial fishing and nets are not as noticeable as in years past and with less nets, that can make bigger, older and wiser bass feel more comfortable to come to shallower water. This lake is just fun, fun, fun to fish! It’s big and basically 5 lakes in ONE. Comedero has amazing structure for the angler and that also makes it incredibly fun.

As we reported last year when announcing we were reopening our operation on Comedero, the road to Comedero is now fully paved. Therefore the ride to and from Comedero is smooth sailing and not a hard trip at all. The paving of the road cut almost 2 hours off the ride and now it’s right at 3 hours from Mazatlan. We stop in the old historic town of Cosala and stretch the legs and take some photos of the old Church and town square. The bass boats are new as of 2016 and the best all welded bass boat on the market…XPRESS!!! Each boat is equipped with powerful Minn Kota 80 lbs thrust 24 volt trolling motors, 60 HP 4-stroke Yamaha outboard engines, sonars front and back. The sonars on the front have just been upgraded from Lowrance 3x units to their color 7″ units (Elite-7 HDI) with DownScan Imaging. Lowrance makes the best sonar on the market and these new Elite – 7 HDI sonars are perfect for these XPRESS boats and locating depth, bass and structure on Comedero! Especially the bigguns!

Daniel Howard with his 10.4lb Comedero Trophy. (NOTE: some images on this page can be viewed larger by clicking on them).

Folks, I cannot express in words just how hot Lake Comedero is right now. Actually, it’s been hot since we reopened last year but this year seems to be on a whole new level of HOT. If you like to catch big bass and A LOT of them, you should seriously consider going this season while the lake is producing incredible big bass numbers daily! Who has ever heard of catching 21 bass over 8 lbs in one day? I had before Shane called because I was just there a few weeks ago and experienced it myself,..AND Oldham and Big O were hauling in anywhere between 20 – 30 bass per day over 8 lbs! There are two more spawn periods left in this season…February and March. There are going to be MORE big bass move shallow in the next two months. Don’t miss this golden opportunity!